Our Active Christians Today 2017 Winter Retreat was a great experience. A warm February weekend in the Pokagon region of Indiana brought together students from the University of Toledo, Bowling Green State University, Ohio University and Ohio State University. We enjoyed a great keynote speaker, fantastic workshops, inspirational worship and fellowship together as we found out what it means to "PLAY!"

There is always something happening at ACT! A great example was our Game Night, Indoor Snowball Fight and then a great night to worship together with Active Christians Today Bowling Green. Our doors are open! Come and join us as we follow Jesus in discipleship, community and joy!

It was a night of fun and laughter! On January 20, 2017 we held our "Gingerbread Building Contest" at the ACT UT Estate.

Teams and individuals challenged to make the best gingerbread creation! We used graham crackers instead of gingerbread for the structure. We had many contributions for the decorations. The structures were created on a plywood base that was wrapped in parchment paper.

All building materials were provided in the kitchen. Most of the first half hour (and for some a little more) was spent building the structures using royal icing and the crackers. Everyone then turned to using the elements provided to decorate their structures.

The results ranged from the University of Toledo's University Hall to campsites, houses, a food booth and a special treat dedicated to the Cleveland Browns... There was a LOT of laughter throughout the evening!

Enjoy a video report of our Gingerbread Building Contest!

Merry Christmas 2016 from Active Christians Today at the University of Toledo!

We enjoyed a wonderful and joyful Advent and Christmas season. Take a look back at the fun and get set for the New Year! 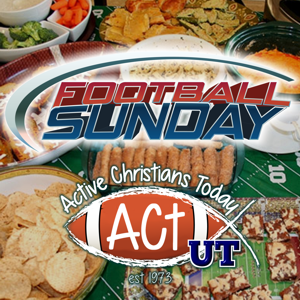 ACT UT and ACT BG joined together for and amazing Football Sunday party on February 5. Students from both the University of Toledo and Bowling Green State University participated in all of the fun.

Our evening began with a special time hearing the testimonies of Believers who played in this year's big game. Testimonies were recorded during the weeks leading up to the game. These testimonies were extremely powerful. The video closed with a presentation of the Gospel and then... it was time for the game (and commercials!).

The ACT UT house was ready with three TVs so that everyone could watch the game - or the commercials as the case may be. Our basement was devoted to those who wanted to focus on the game.

UT students spent the afternoon preparing a vareity of sliders to keep the crew well-fed. Chips, dips and a variety of traditional football snacks were brought by many to add to our wide selection.

It truly turned out to be a great night! Everyone made their picks and then sat back to watch a truly amazing and historic football game. Fellowship, food and fun made for a wonderful FOOTBALL SUNDAY!

Our Fall Semester Coin Wars challenge mission giving benefits the people of Haiti. The disaster of Hurrican Matthew continues to reverberate to this day.

Our Coin Wars challenge raised more than $200 during the Fall Semester. Through consultation with former ACT'er and Haiti missionary Dave Warner, we have elected to give the entirety of our funds to the Northwest Haiti Christian Mission and specifically to long term missionaries Jose and Jody Castillo. If you would like to give to this effort, CLICK HERE for details.

Once again Haiti is in the midst of a disaster. There are moments we witness when we must act. This is one of those moments. Category 4 storm Hurricane Matthew carved a path of destruction through Haiti killing more than 1,000 people with more than 60,000 people displaced. In all, more than 14 million people are in need of urgent assistance. In addition there are warnings the aftermath could worsen the nation’s cholera epidemic which killed at least 10,000 people after the 2010 earthquake. The Category 4 storm brought 107 mph (172 km/h) winds, torrential rainfall, and floods to the poorest nation in the Western Hemisphere, wiping out entire villages.

We cannot stand by as an entire country suffers from another devastating, deadly natural disaster. Our belief is that helping end a big problem begins with everyone helping in their own way. It is an awesome responsibility and that is our goal with "Coin Wars." It is the males versus the females as we raise funds to do our part in helping some of the poorest people on earth. We will continue collecting funds through December 9. All funds will go toward relief efforts.

So, what is "Coin Wars?" We had two jars in front of the fireplace. One jar was labeled "Guys" and the other "Girls." Every coin placed in a jar was considered "positive." So, 100 pennies is $1.00. However, if a dollar was placed in a jar, that was considered a negative - so $1 bill equals negative $1.00. In other words, a jar with 100 pennies and a dollar bill in it equals exactly ZERO!

Our men won the challenge by a rather substantial amount. In our Help Haiti challenge, the losers are creating a scavenger hunt for the winners. The scavenger hunt will be held on one of our Friday night events during Spring Semester.

Active Christians Today... Who We Are

Active Christians Today (ACT) is a campus ministry on the campuses of the University of Toledo and Bowling Green State University. Since the early 1970's when we were founded until today, we have been focused on bringing the message of Jesus to UT and BG.

We are a non-denominational Christian community that encourages and challenges students to develop a relationship with Jesus Christ. We have weekly worship services, Bible studies, small groups meetings, retreats, cookouts and parties, ministry teams, mission trips, as well as other events throughout the year.

We would love for you to join our community of faith!

We had a wonderful time together at the Active Christians Today Annual Celebration at Garden Park Church! We were blessed with great fellowship, great food, reports from our campus staff, students and sharing memories and the history of Active Christians Today with our alumni. A silent auction was held to raise funds for ACT and we heard reports and testimonies from each of our campus staff. This is truly a historic time for ACT as all of our current staff are alumni of Active Christians Today. Don Williams discussed his history as a student at the University of Toledo and how ACT students reached out to him as an unbeliever. Scott Weaver talked about how he was searching for a Christian group that was grounded in the Word and found it in ACT. Michelle Williams discussed her campus experience and the series of events that eventually led her to ACT. God has blessed us tremendously!

The University of Toledo Fall Student Involvement Fair will be held on Wednesday, August 31, 2022 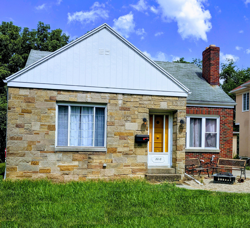